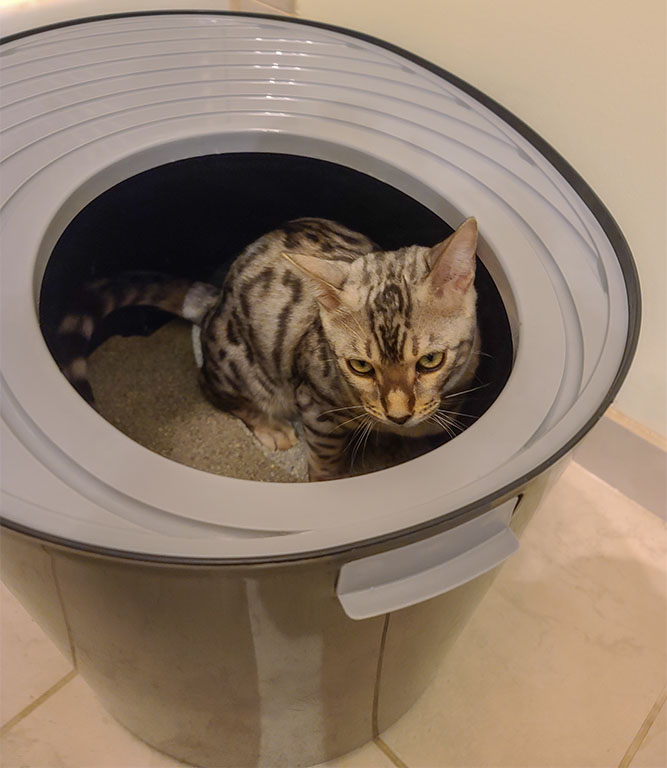 Preparing for the arrival of a new cat or kitten is an exciting time; one has to equip the felines basecamp, there are many items to purchase, things to learn, and litter box tips are always helpful.

The second most common reason people surrender their cats is behavioral issues, including excreating outside the litterbox. The litterbox is a sensitive area for the animal; it’s a significant scent-soaker, and felines use urine to mark their territory. A cat’s sense of smell is 14 times better than humans. Can you imagine being subjected to sharing a bathroom with another if your sense of smell was so great?

Cats are clean animals in general, and they spent between 30 to 50 percent of their day grooming themselves. They will use their litterbox unless there is a reason not to. Cats like routines, and if there is a deviation from their usual, the owner should notice. Is it a health issue, a territory concern, or is the litterbox disgusting?

Some cats are diggers and will leave litter scattered around if you choose the wrong type of box. Depending on your cat and it’s age, we recommend a litterbox where you cat jumps into through the top. It will cut down on the amount of litter scattered outside of the litterbox when your feline is conducting their business.

Yogi has always used his litter box since he first arrived home and has never had an accident.   I purchased an IRIS USA Top Entry Cat Litter Box since it was similar to the breeders and is well-reviewed. We use Dr. Elsey’s Ultra Unscented Clumping Clay Cat Litter and add Dr. Elsey’s Precious Cat Ultra Litter Attractant to it. I scoop Yogi’s litter box three times daily, and The Litter Genie makes disposing of waste a breeze and keeps the odor contained.